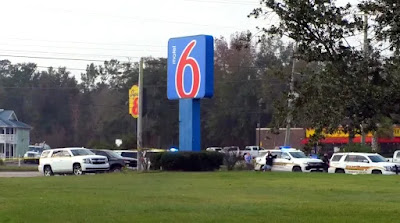 Authorities now say that a Mississippi woman who fatally shot two police officers was killed by one of the officers who returned fire during a shootout.

"At approximately 4:19 a.m., Amy Anderson, while seated in the driver’s seat of her vehicle, fired one shot" killing Sgt. Steven Robin, the agency said in a news release. Anderson's minor child was in the car with her at the time.

A second officer, Branden Estorffe, who was on the phone with child protective services, heard the gunshot and "immediately returned to Anderson’s vehicle. As Estorffe approached the vehicle, Anderson and Estorffe exchanged rounds resulting in fatal injuries to both individuals," the release stated.

Anderson's child was not injured.

The chaotic shooting happened after Anderson told a manager at the motel to call 911. The manager said Anderson "sounded distressed," the news release said. Robin and Estorffe arrived at the motel minutes after the call was made.

The two officers spoke to Anderson and her child for about 40 minutes. Anderson told the officers that she thought she was being followed by a person in a white pick-up truck.

"The interactions with Anderson and her minor child occurred both inside and outside of their motel room, during which time the officers took statements, gathered information, and investigated allegations made by Anderson," the Mississippi Department of Public Safety said.

The officers decided to contact child protective services because they were worried about the child's safety. As Estorffe was on the phone, Anderson loaded her vehicle and said she was going to leave the motel. The shooting occurred shortly afterward.

The Mississippi Department of Public Safety has not said what sparked the shooting.

"This is a very tragic situation," Commissioner Sean Tindell said in a statement. "It is my opinion that Officer Estorffe and Sergeant Robin’s concerns for the safety of the minor child were well-founded and based upon the mental state of Mrs. Anderson their heroic actions very well may have saved the lives of others."